high of 91 today in San Francisco… yikes. could be interesting.

PHP, you are weird.

Just one last post about moving: I am so sick of it. Honestly, I really wish this tiny studio apartment would be enough for me for the rest of my life so I never have to see another cardboard box again. Let’s recap the last eight (eight!) years of my life:

Twenty four places in the last eight years. The ones with the * are the locations I lived for 8 months, the longest continuous length of time spent in any one place. I am really sick of moving. Our current lease is for a year, so we shall see what happens.

Ok, since the last month has been absolutely insane with finding a new apartment, moving all our stuff from Wisconsin, big releases at work, etc, I decided to just make up for my lack of posting with some pictures and short descriptions. 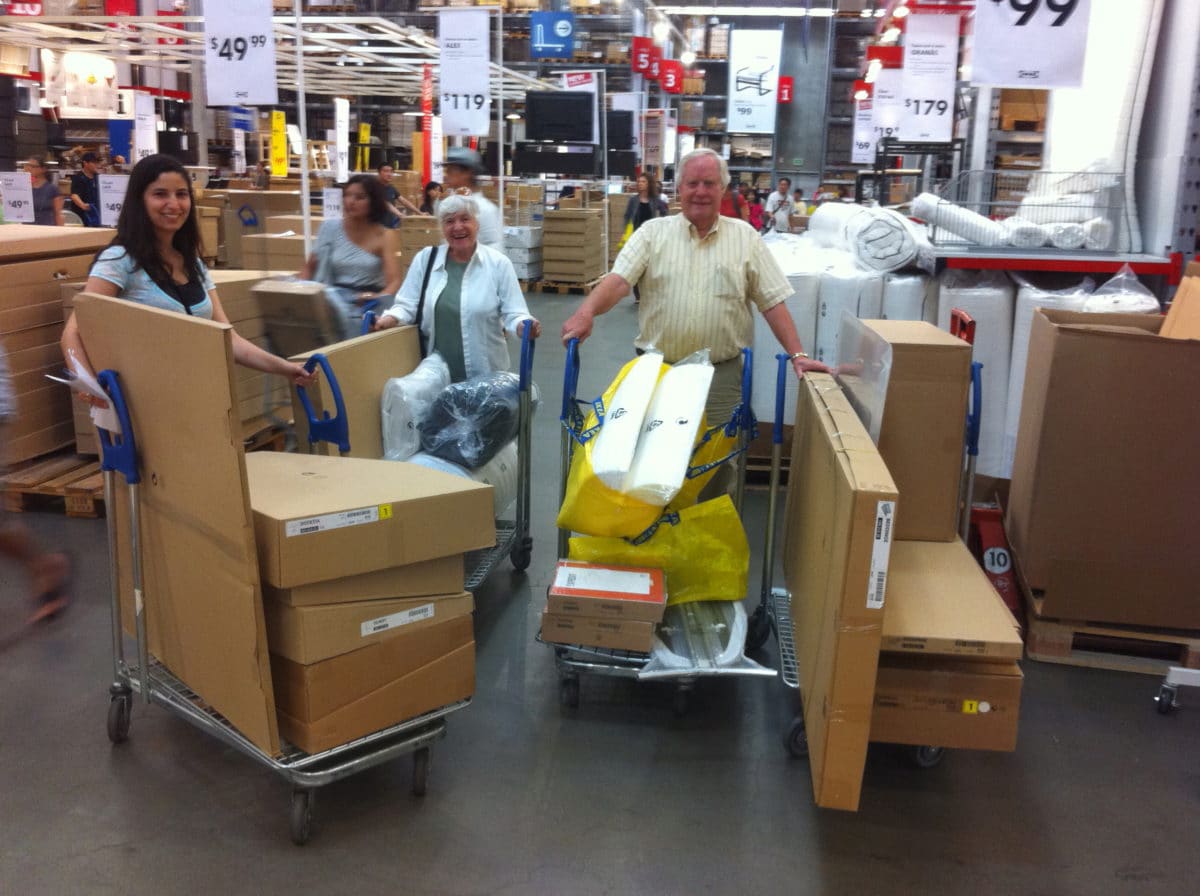 Here is Mariam and my grandparents with all of the furniture we bought at Ikea. Yeah, we basically furnished the whole place in one trip. I am still amazed that we were able to fit it all into the back of my grandpa’s SUV. It was so stuffed that I had curl up in the back seat and have Mariam sit on my lap. Longest trip across the Bay ever.

So yeah, our apartment is very little. It’s half the size but twice the price of where we were going to live in Madison. The joys of San Francisco. We just used UPS to ship all of our stuff out (which thankfully is not much, since we have no space left). It took us about a month to final get everything completely unpacked and all the furniture built, but now it is really starting to feel like home. 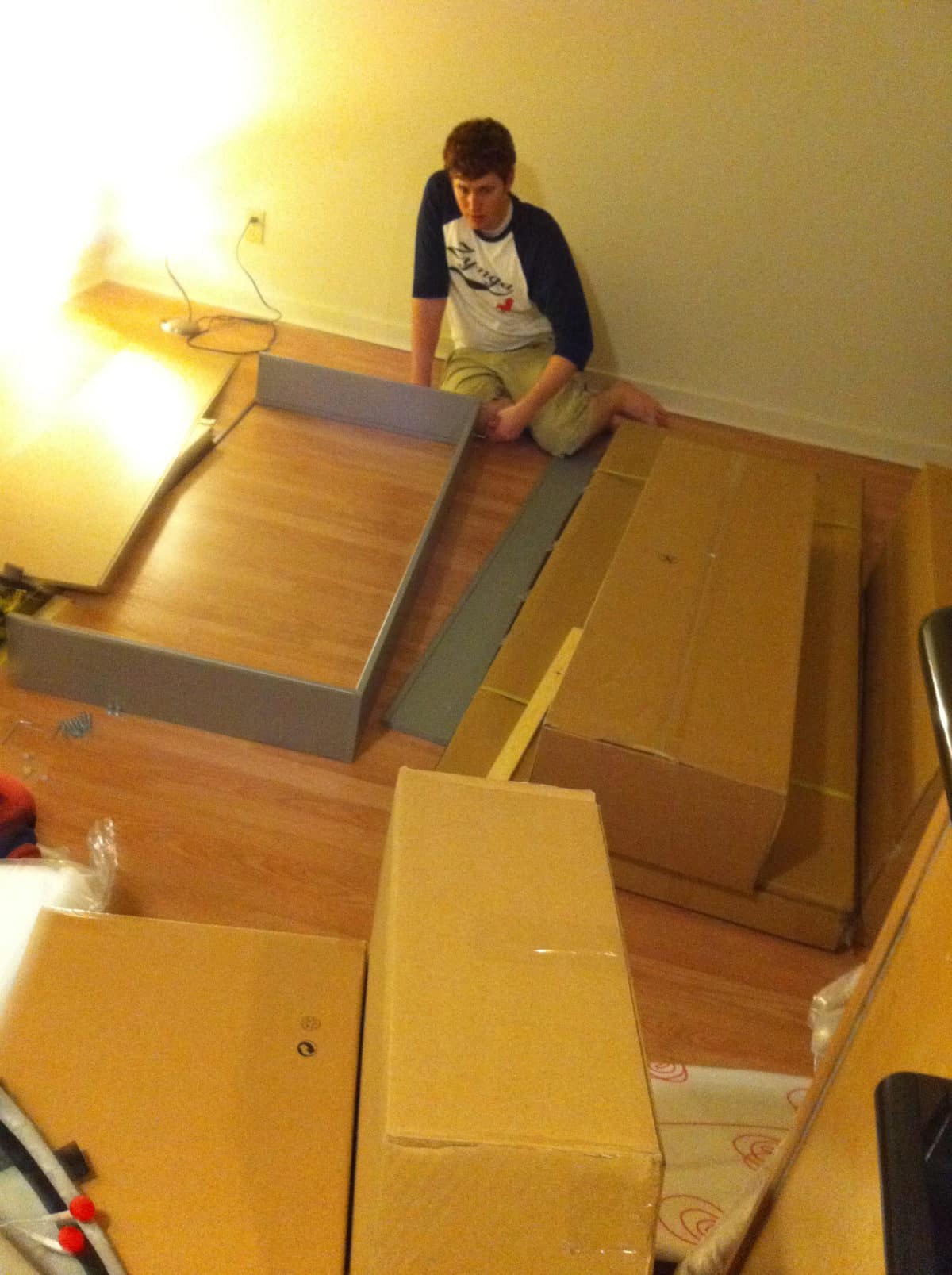 As you can guess, this was quite the challenge. 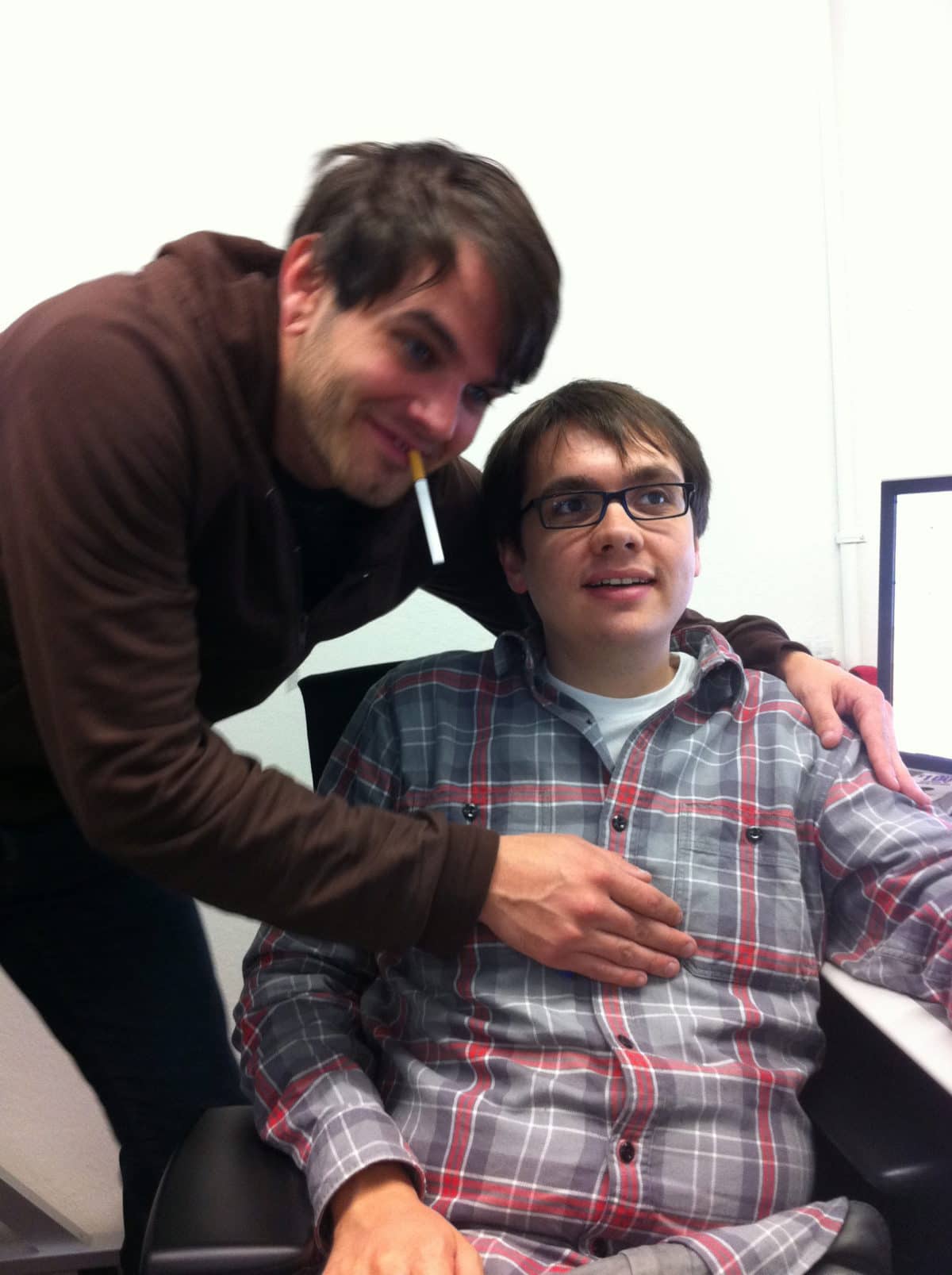 My coworkers. Yeah, this is what I have to put up with everyday at work. We have fun. Our schedule has been crazy busy, and I hope someday I will be able to talk a little more about what I have been working on. The really fun thing is that the week of our move was when we were doing our first major roll out. Staying at work until 3 am and then spending the next day moving suitcases is always a blast. 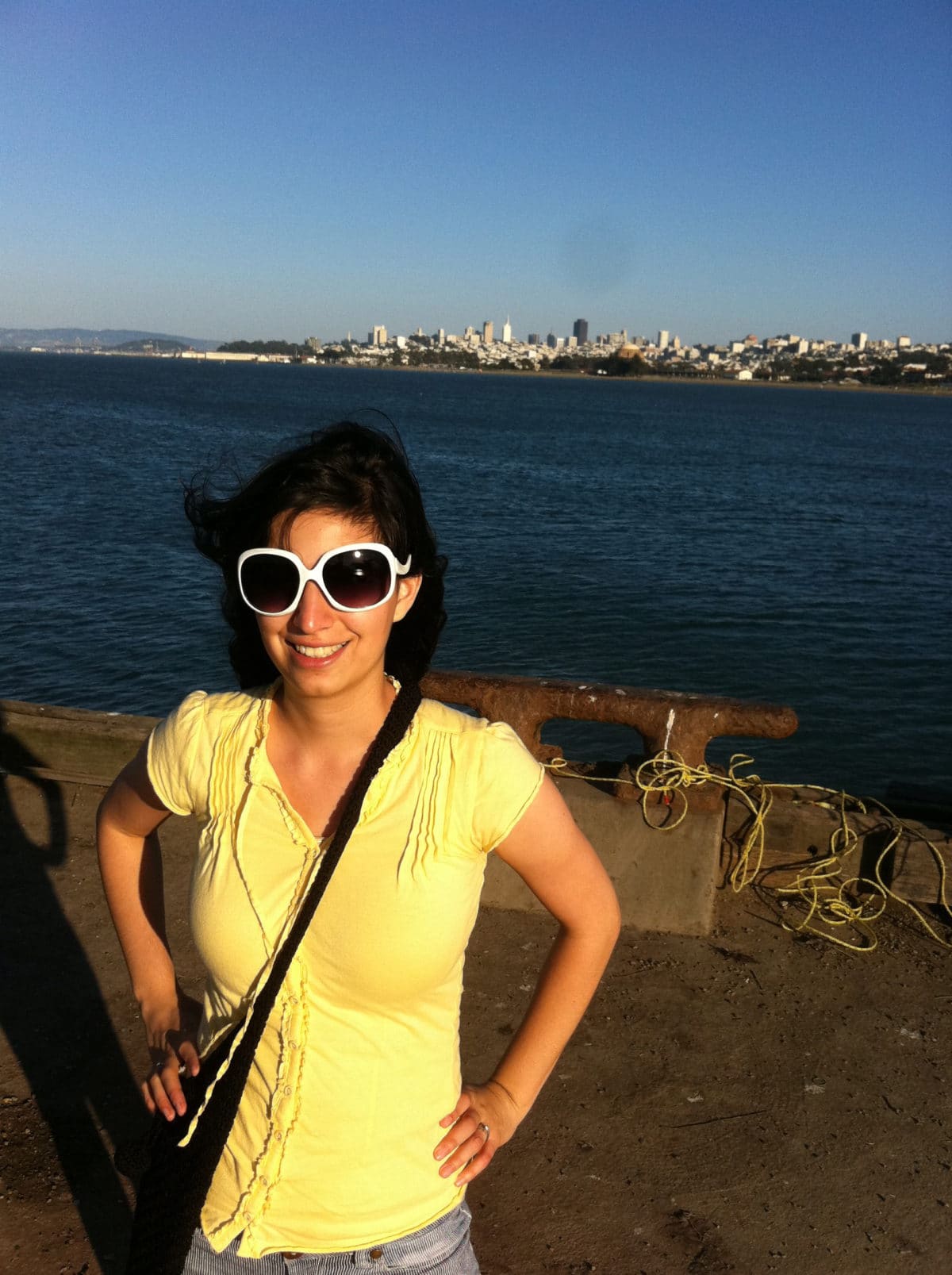 The weather in San Francisco has been really great for the past couple of weeks. We are finally getting our summer. Mariam and I spent yesterday out and about: first we went to the farmer’s market to pick up supplies for tonight’s tacos dorados extravaganza at our grandparents house. Then we hit up Katanaya with Brooke and her boyfriend Jon, which was tasty. Later in the afternoon Mariam and I walked up and down Crissy Field to enjoy the awesome weather and that’s when I took this picture. Hard to believe this is the same city where I spent the entire month of July wearing a hoodie.

I think Mariam and I have finally entered a state of normalcy, something that has been hard to come by since our wedding. It’s pretty crazy it’s already been 5 months. Since it’s her birthday and our six month anniversary coming up in October, we are looking into doing something fun like a long weekend up in Mendocino. We shall see. It’s just nice to finally feel like we can settle down.

Dropping Out of School

I mentioned in passing in my last post that I had dropped out of school. I am sure some of you might have no idea why, so I thought I had better write a post on what’s up.

I started as a full time employee at Zynga on August 16th. It was a pretty crazy week coming to the decision and figuring out logistics. On the Wednesday before my last week of the internship, my team lead brought up the idea of a full time position. HR made me the offer the next day and we had the weekend to think it over. We gave our answer on that Monday.

This was not an easy decision and I did not take it lightly. There were many factors that went into it, though first I want to make clear what was not involved in the decision:

1) This was not about money. Mariam and I were doing fine on my student income. We have no debt and school was essentially free. Sure, having a positive cash flow is awfully nice, but I didn’t drop out of school for financial reasons.

2) No one forced me to choose the job. Mariam was actually against it and it took a lot of discussing and convincing before she agreed.

So what were some of the deciding factors?

1) I didn’t love grad school. Some of that was my own fault: I didn’t put in enough effort to make it really worth my while. I think that part of the reason I didn’t try was because I didn’t really enjoy it. I’ve never been interested in research or writing papers. I just want to make cool stuff. Will I ever go back to grad school? Possibly. I know, I know, it’s so tough to go back to school after you get an income, but if I decide I really want/need it, I will do it.

2) I am not convinced a graduate degree in computer science helps me in my career goals. None of my peers have advanced degrees, but they certainly have years of experience that I lack due to school. Now, if I wanted to join a research lab at say Google, an advanced degree would be important. But when my ambitions are more along the lines of becoming an independent software developer, I think real world experience trumps academics.

3) Stock. Ok, yes, I know above that I said it wasn’t about the money, but maybe it did play a small role… Given the direction that Zynga is going right now, I feel like it’s important to get as much stock as quickly as possible. Obviously I know nothing about the business decisions at Zynga, I just have a gut feeling the stock is going to be quite valuable in the future. I think an opportunity like this, a change to join a fast-growing startup company that is actually making money, is pretty hard to come by.

4) I’m feeling old. Yeah, I know, I am only 26. But so are guys like Marco Arment and Alex Payne, and they are already rockstars in the tech industry. The more I thought about spending another year away from real world experience, the more I felt like that was just something I could not afford. My hiring manager took me out for lunch during my “deciding” period, and he told me that he would have thrown out my resume given the lack of actual experience. I feel like it’s time to stop spinning my wheels and I really did not feel like one more year of grad school was going to put me any closer to achieving my goals.

I’m happy with the choice I made. I enjoy the interesting engineering challenges I’m getting at work and the fun atmosphere. Now that San Francisco is finally having some summer weather, Mariam is starting like the city too. Things are going well.

“Apparently this ice cream was supposed to be delivered to Farmville’s studio, and they just found out it’s over here, so get some quick.”

Ok, this might seem like a strange topic after such a long recess from posting and given all of the really interesting things I could be talking about (dropping out of school, new job, new apartment, etc). But during the course of our unpacking, organizing, and trying to fit our lives into a small San Francisco studio apartment, some stuff just had to go. Being the unsentimental minimalist Scandinavian that I am, I was pretty quick to toss things into the throw away/donation piles, some of which Mariam had to fish out later.

Anyway, as a married man with Ikea furniture and a 401k, I decided that the posters that adorned my walls through college were no longer needed. Mariam convinced me to at least document them before I threw them all away. So, here are the few posters that have stuck with me through the years: 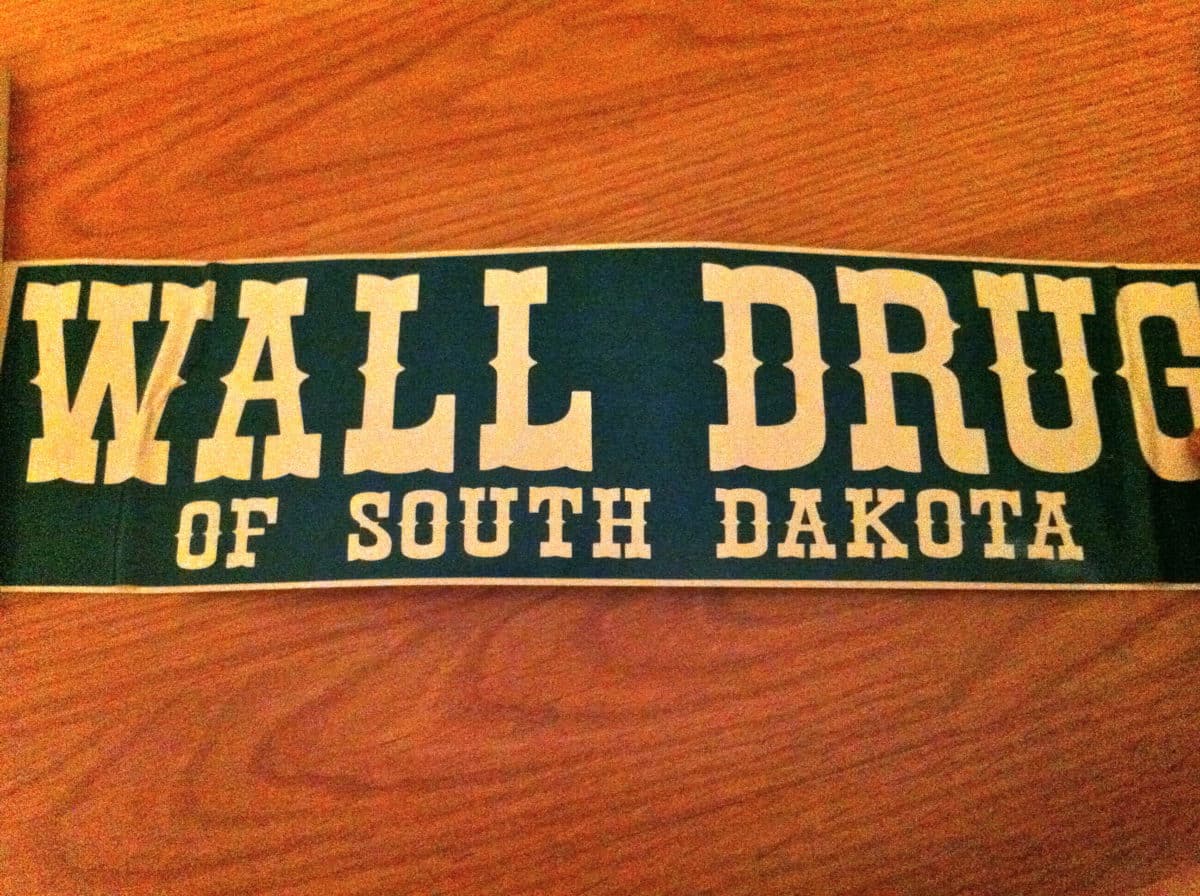 Ok, I really have no idea why I still have this thing. I picked this up about ten years ago on a family road trip back from my sister’s college graduation. If you have never been to Wall Drug, well, don’t worry about it, you aren’t missing much. Honestly nothing sticks out from our short stop there except for me wanting to make sure I got a bumper sticker. Pretty weird thing to have kept on my wall this whole time. 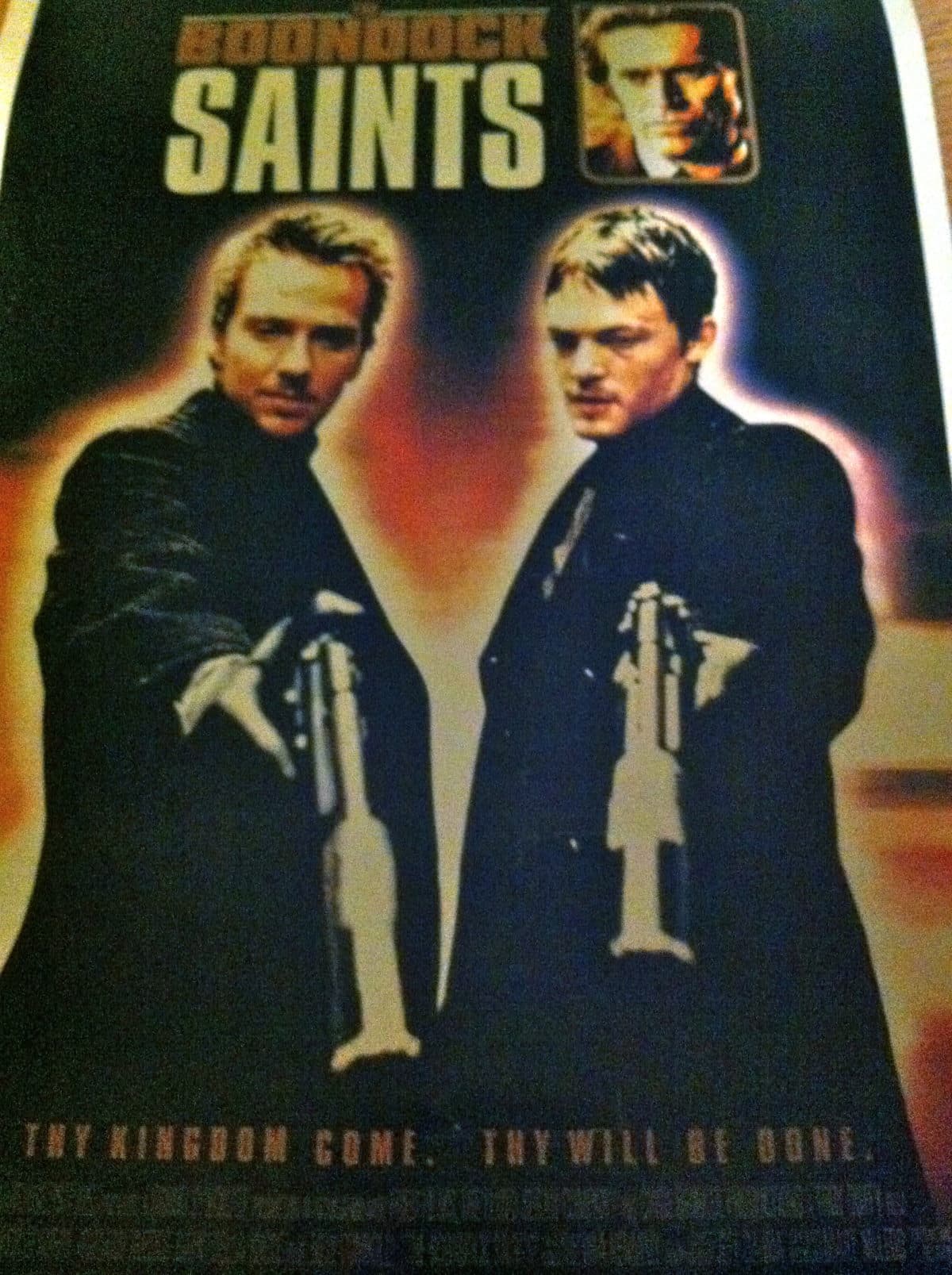 I picked up this poster at a BYU Bookstore poster sale a few years ago. I found that a bit ironic… Such a goofy movie, perfect for a bunch of roommates to sit around and watch late on a weekday night when we were supposed to be studying. “There was a firefight!” 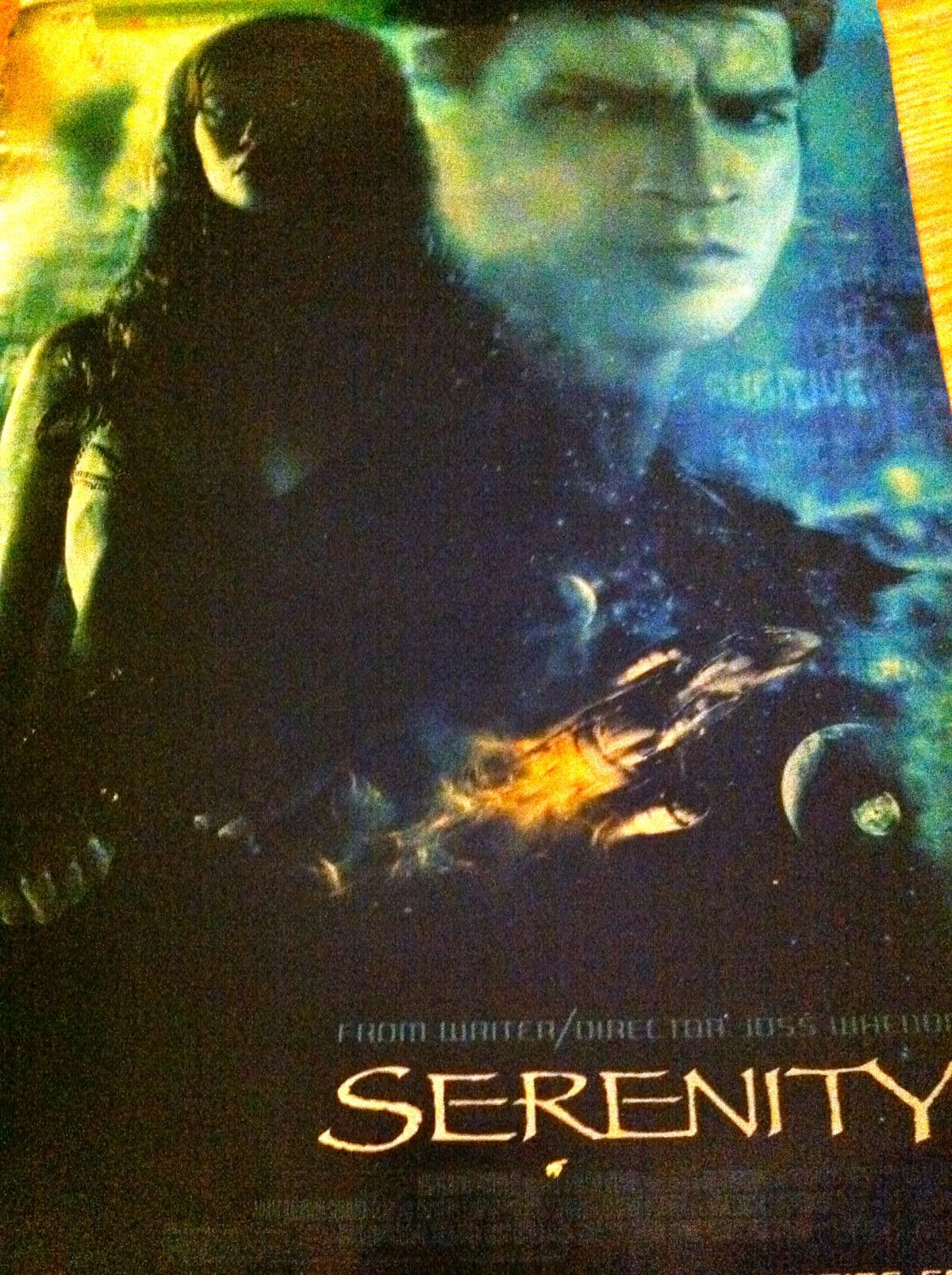 Good movie inspired by an amazing television show. I remember reading about Firefly on Slashdot and then being introduced to it by Kenji back in Carriage Cove. One of the few tv shows I have watched through multiple times. I think Kenji gave me this poster. “If wishes were horses…” 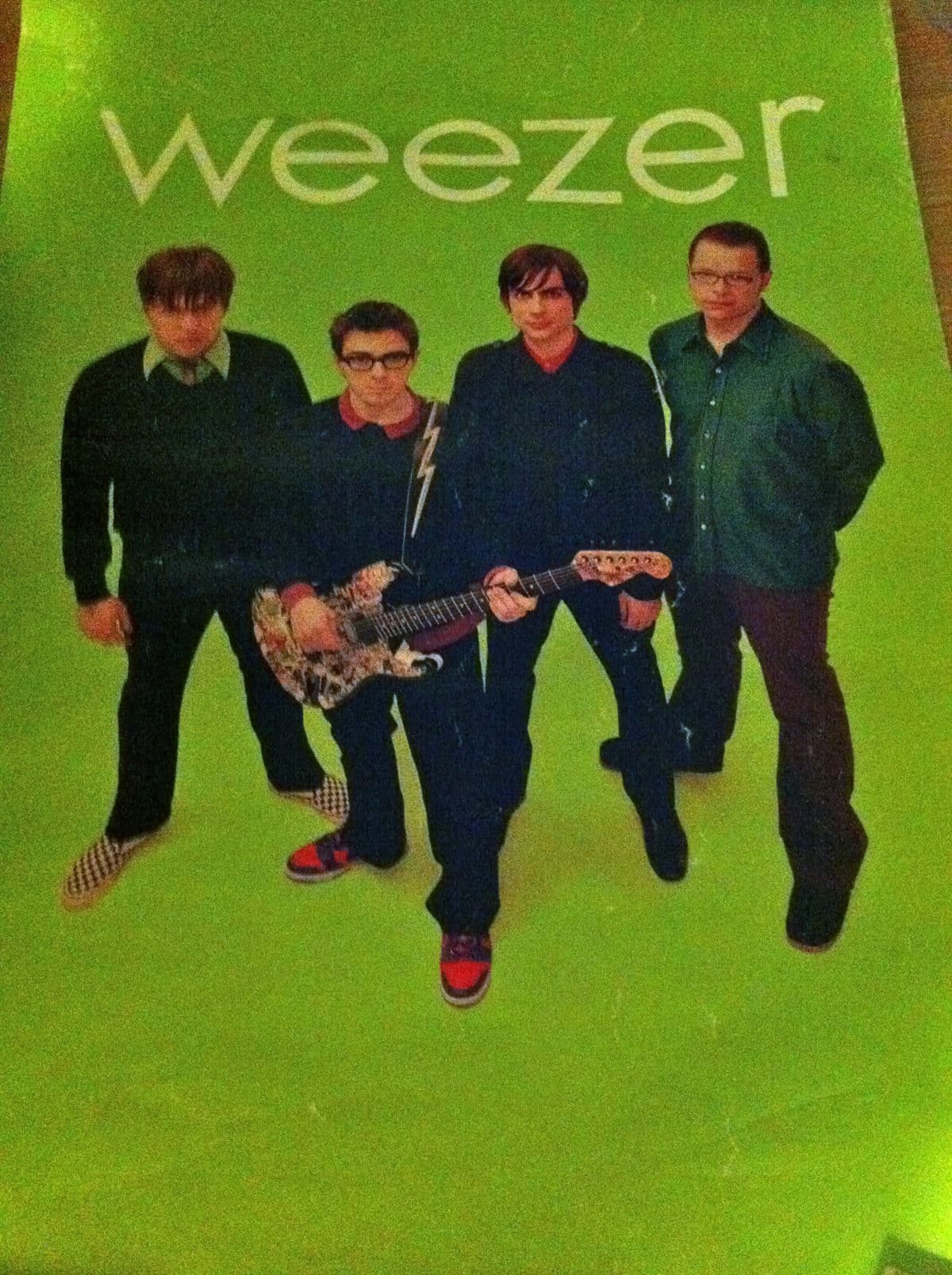 This one goes back a long ways. My friend (girlfriend? who knows, life was so complicated as a teenager :P) Lindsey gave this to me back in high school. I loved Weezer. I felt like Pinkerton was speaking directly to my soul. I spent many hours driving around playing and singing along to Weezer during high school. I haven’t really kept up with their music, though from what I hear, sadly I am not missing much. “The world has turned and left me here..” 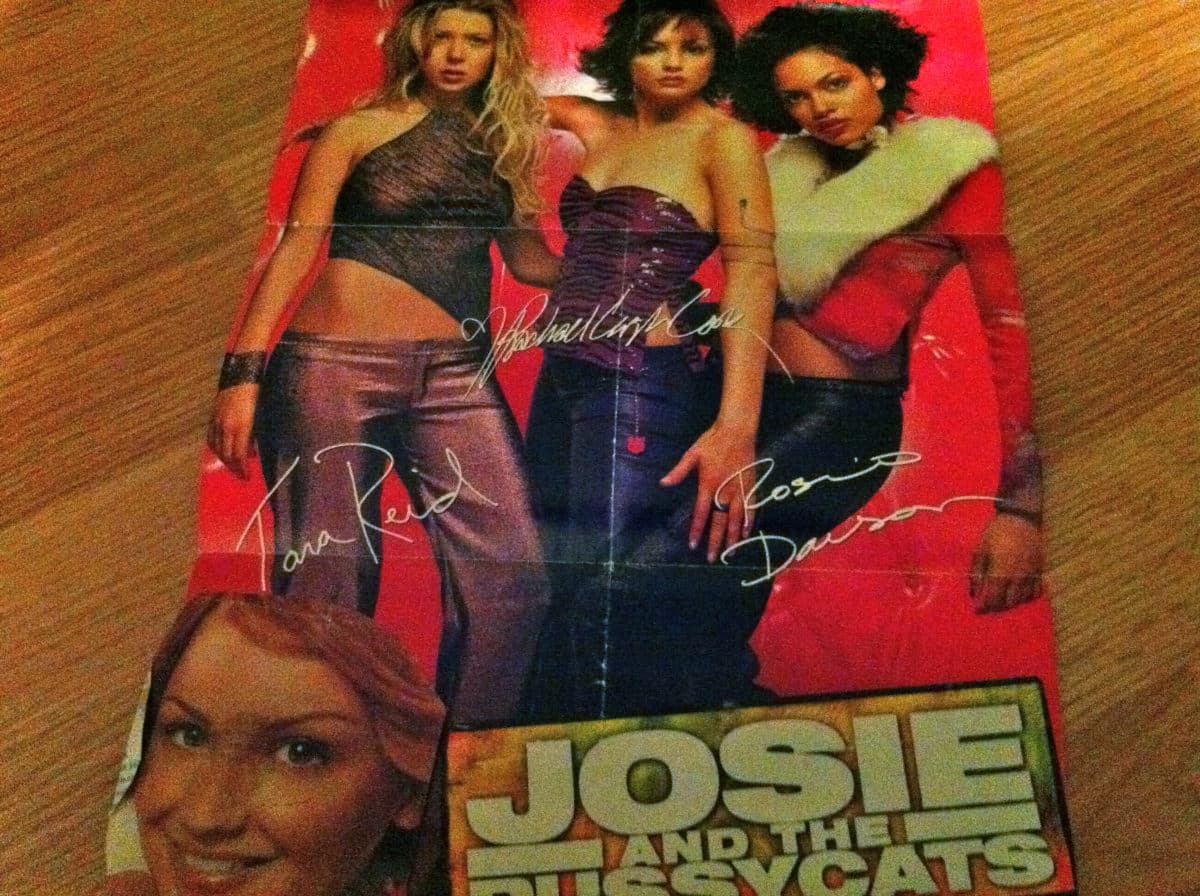 Josie and the Pussycats

Ah, yes. This poster (including the RLC’s head cut out from some teen girl magazine) held a special place in my high school locker. I’ve written about my huge crush on Rachael Leigh Cook before, and this poster was just a small part of that. I remember watching this music video over and over. Oh man, early ‘00s pop punk. And then there was this one. She’s All That? Still a good movie is you ask me. Josie and the Pussycats? Ok, yeah, it was pretty terrible, and I am ashamed to admit just how many time my friend Andrew and I watched it. Man, it’s making me all nostalgic :P. “It took six whole hours, and five long days, for all your lies to come undone. And those three small words were way too late, ‘cause you can’t see that I’m the one.”

Anyway, those are the posters that survived high school and college. They served me well.

For a tool that claims to help make “fantastic documentation”, phpDocumentor has really terrible documentation.

At the Giants game in Zynga’s suite. So far only the beer has shown up. Mariam and I seem to the only ones still waiting for something.

Remind me again why I don’t work out every morning? The day seems so much better already.

ok we now have a bed to sleep in. well technically a futon but at least it’s off the floor and won’t deflate on us at 4 am!

we have internet at home!!!

air mattress lost all air at 4 am this morning. :/

I am not the only boyfriend/husband who is grateful AT&T has service in the basement of Anthropologie.

been using this all day in TextMate. I think I will stick with it.