seriously why don’t I start every mornin with a run and a real breakfast? makes for such a better beginning of my day.

→ Some Thoughts on the Prosperity Gospel

dropping off mariam at the airport :(.

does buy nothing day still mean anything if i buy my girlfriend things the next day? 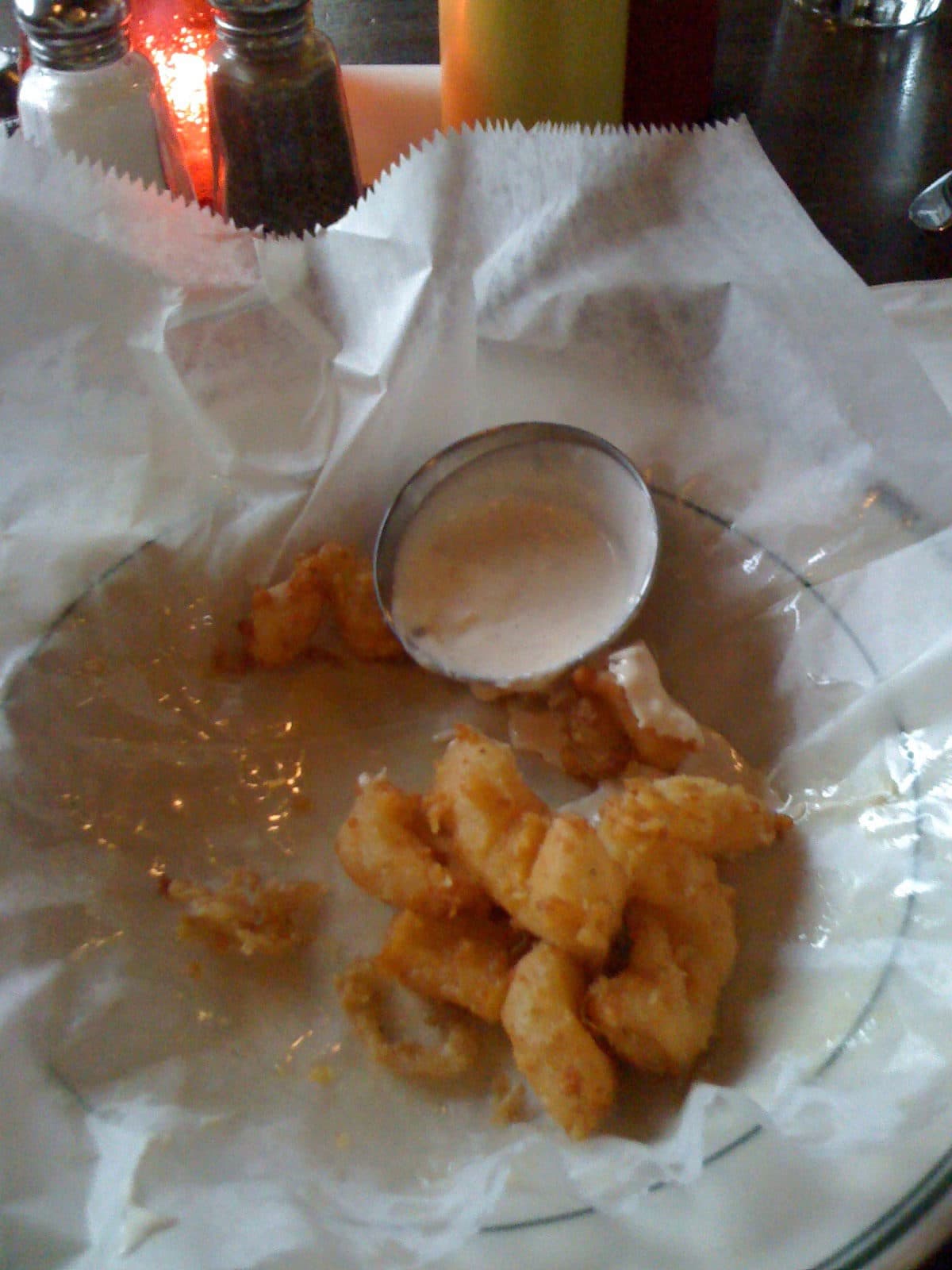 sigh, Obama, more troops is not the answer. disappointed…

sleeping through class seems to make it pass by much more quickly.

class: last place i want to be right now.

said hi to the gf, then a quick goodbye. :( but she is here for the next four days so I can handle a few hours apart.

lets rewind a bit over a decade. there i am, a scrawny, awkward, high school freshman beginning my time on the baraboo boys cross country team. running was HUGE to me in high school and i’ve written a few times about it before1.

the thunderbirds were a team with “a tradition of excellence” as we liked to say. we consistently wiped the floor with the competition at our conference championships and always were a top contender at sectionals. one thing that made us great was coach arndt. the guy was “TUFF”. i’m sure you can imagine what kind of motivation it is to have your coach, a man 30 years older than you, running right next to you and often BEATING you during practice. i remember how at some point during almost every workout, coach would start dry heaving. we all knew what that meant. as soon as he was done, he would make some comment about how he needed to quit eating the those frito lays for lunch and then he would pick up the pace! the dry heaves meant it was time to suck it up and move.

another huge reason for our team’s success was how much fun we had. especially for my first two years, the varsity team was VERY tight knit. we were really great friends. kendall mcfarland was the team captain my freshman season (1998). he started the baraboo boys cross country unofficial webpage as a place to post pictures and race results. when kendall graduated, he past on the responsibility to me. unfortunately i let the site die, and by the time i graduated, no one was interested in keeping it up to date.

so it languished, one of those sites on angelfire.com that hadn’t been touched in years. when i got back from my mission in 2004, i had of course completely forgotten the administrator’s password and i no longer had access to the email account that was assigned to the account. i knew that there were a number of pictures stored on the account that were not even linked from the page, so i thought it was really unfortunate i couldn’t access it.

well, a little while ago i thought maybe the people at angelfire.com would have mercy on me, so i contacted them with as much information as i could to see if they would give me the admin password. miracle of miracles, they did!

over the years angelfire decided to encumber the freely hosted web pages with tons of banner ads and popups, so i’ve decided to remove the site from its original location (www.angelfire.com/wi/baraboocc) and archive it on my host. the new web page is:

everything is basically the way i left it when i last touched the site in 2000. the hit counter sadly stopped working so i removed that. and we used to have a message board. i remember stupid debates on there with runners from other teams, etc. sadly that was hosted somewhere else and is now gone, so i removed the dead link. however the guestbook is still intact, which is fun. actually there are a lot of orphaned html pages that i probably ought to link up somehow, though i am loathe to change the page much further for historical value (not the mention that the html is essentially unreadable). anyway, enjoy this little slice of the past written in frontpage 98. 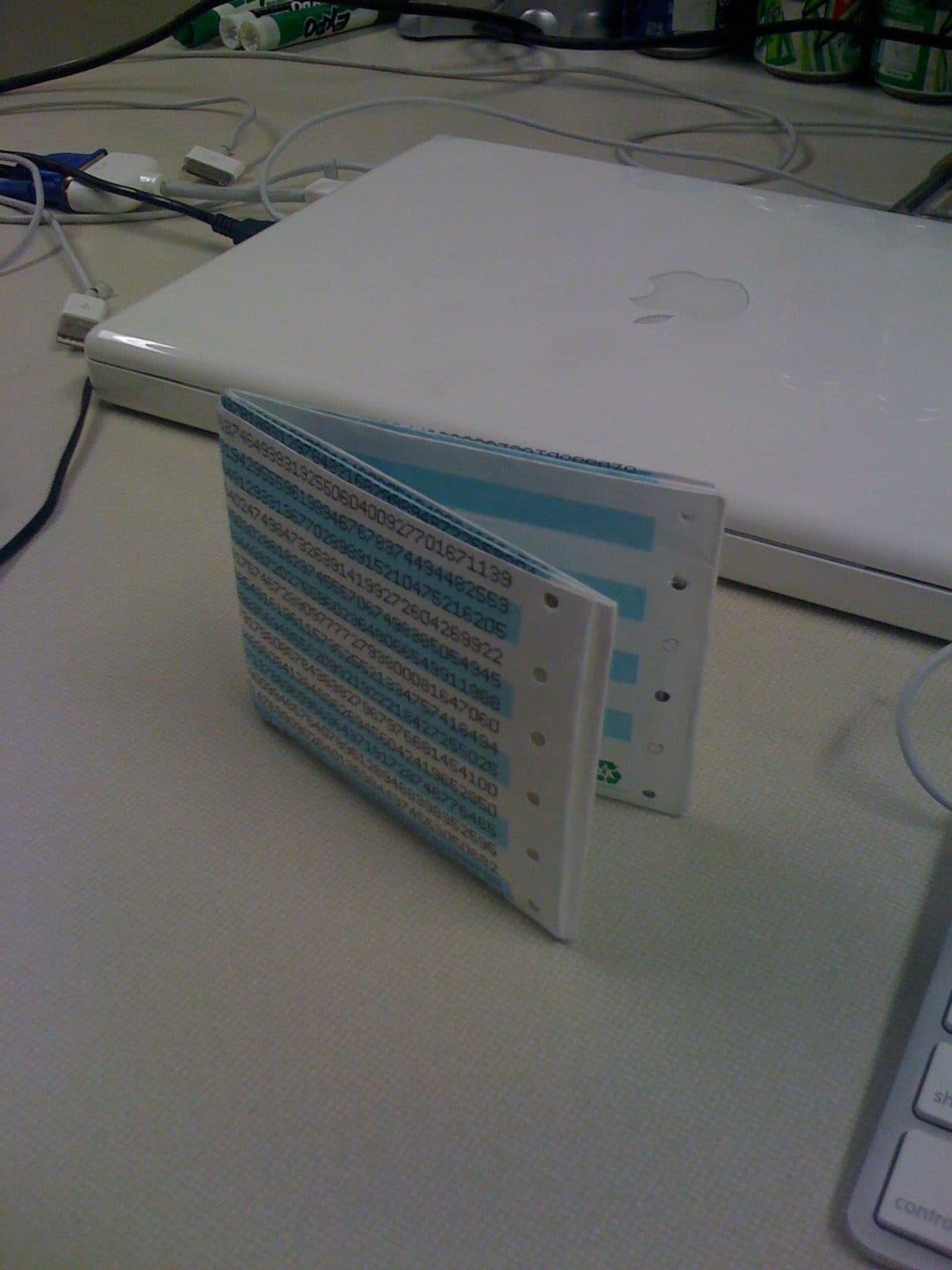 my new wallet. thanks Amy Jo!

→ The War For the Web

i think we should worry about google just as much as apple.

just got a free donut from greenbush bakery. very tasty.

mtn dew? check. red vines? check. hours of podcasts? check. time to finally do what i have been putting off for a month and a half.

last time machine backup is a week old but Mozy should fill in the gaps.

detectives walked into a computer shop, thought things were suspicious, seized the laptop, found me through the serial number. crazy.

so the police might hAve found my MacBook? not getting my hopes up yet.

“Control-flow based pointcuts select every join point occurring in the control flow of join points matching the specified pointcut.” eh?

time to start specing a new mbp? hoping renters insurance will give me at least something.

speaking of which, if anyone sees me logged into to chat tonight, please let me know.

of course the university police call right in the middle of my convo with visa cancelling all my cards to say my wallet has been turned in..

so I’ve procrastinated doing the labs in my class because the tool is so completely horrible I get sick when I load it. sigh.

is the tcu vs utah game not being nationally broadcast?

great insights from Austin on the LDS Church, politics, and recent events.

i get insomnia sometimes and all i have to show for it are a few lame tweets… i wonder how much you can make at #2 on itunes..

heard owl city compared to the postal service twice today, so i listened. much more sugary than anything from ben gibbard. a bit catchy.

me reading papers on bug detection.

nothing like being sick to absolutely ruin all productivity.

equifax, you suck. you have NEVER been able to figure out my identity, unlike both of the other credit agencies.

i want a black jack taco.

already had this year’s cold. could this be piggy flu? fever, aches, sore throat all hit in the last hour. sigh.

grilled cheese people were still giving out samples at the farmers market. score.

a cool story about the good guys winning. some people are just so stupid.

oh man.. so many hours of endless fun. 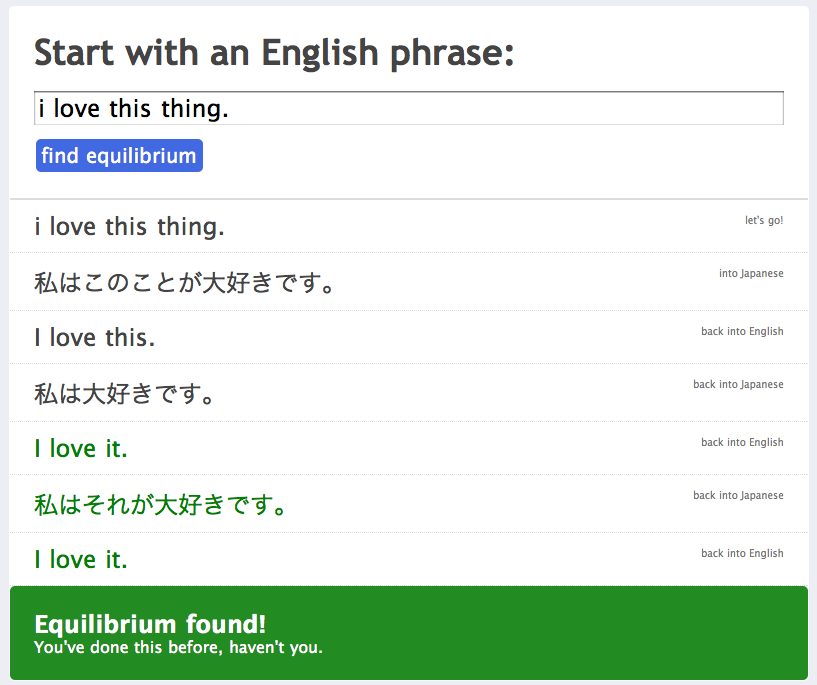 google dashboard just made me waste my friday evening deleting nearly everything from my account.. thanks google!

nothing brightens my day like a knee slap joke in the middle of a dry research paper about using statistical analysis to find bugs in code. 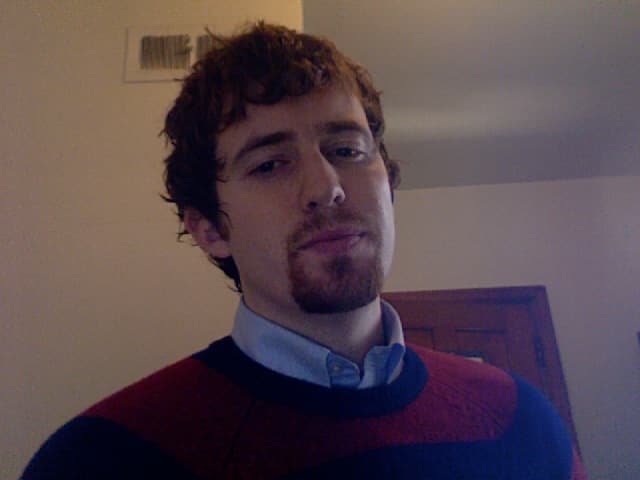 thoughts? are you intimidated?

guest lecturer from MIT talking about some CS theory stuff… glazed over eyes..

i’m still the number one google hit for “broccoli burps”. so sweet.

this is such an amazing idea. i couldn’t think of something better. as i’ve gotten closer to the possibility of marriage, i’ve realized how much i dislike the stress, the cost, etc etc of the typical american wedding traditions. the average american wedding costs $28000. now that is probably a lot more than the average mormon wedding (younger bride and groom, still in school, etc). but as ramit sethi said [1],

My point isn’t to judge people for having expensive weddings. Quite the opposite: The very same people who spend $28,000 on their weddings are the ones who, a few years earlier, said the same thing you’re saying right now: “I just want a simple wedding. It’s ridiculous to go into debt for just one day.” And yet, little by little, they spend more than they had planned — more than they can afford — on their special day.

so how do you really have a simple wedding? i think you need to lose all of the preconceived notions of what a wedding is. forget about dresses, forget about cake, forget about invitations, forget about receptions, blah blah blah. none of those are really what a wedding is about: two people in love committing to be together forever. once you have forgotten about all of those traditions, start planning your day. who do you really want to be spending that day with? how do you really want to be spending the first day of your life together with someone you love? how do you really want to be spending that money you have in your savings account? my mom taught me the importance of “less”. if you haven’t guessed, i have started becoming a strong believer that a simple, minimalist lifestyle is a key to happiness. in fact, it aligns exactly with my religious beliefs. so why not keep your wedding a very personal, simple day? big parties are not a good way to associate with friends and family, so why do we feel the need to throw them for such a special, personal event? i don’t find that romantic at all. anyway, enough of this rant. do what you want for your wedding. but i plan to keep my wedding as simple, minimal, and stress free as possible. to me that is romantic. props to ben and his fiancée for sticking to their principles and going against the grain.

windows, you can take your extra CR character and… well, you know what.

i just want to give a big thanks to the folks at ebillme. it’s a pretty cool service; basically it’s a way to make direct check/debit transactions over the internet without needing to enter a debit card number. they use your bank’s online bill pay system.

but anyway, back in july i found a sweet deal on zipzoomfly.com for a eeepc netbook for mariam to use. it was $169 with a $30 rebate if i paid with using ebillme. $139 was pretty tough to pass up, so i went ahead and got it for her.

well, now four months later, i still haven’t gotten my rebate. but unlike most of the scammy rebate people who would have not cared if i got it or not, ebillme just called to follow up with me and got my new address in their system so they could send the rebate check to the right place. awesome, props to them for that great service.

i am linking to this for my friend rachel. i think she will enjoy this quote the most:

go ahead, and put them on, and wear them as hard as you can. and don’t wash them until they stink so bad that you basically can’t handle it.

i should mention that operation levis is back in force (and has been for a few months now). my 501s are holding up strong, though i think a second pair is in store soon. they are just really comfortable and durable. i have started not to care about anything else. rachel, i hope you enjoyed this little tidbit. and for everyone else, go take a look at rachel’s etsy store. she has some nice calendars.

have an itch to scratch? someone else has probably already itched it for you..

why is the name I wanted to use for my custom CMS already taken by a heart medication???

dear mexico, your embassy website is absolutely worthless. (dear tweeps, don’t let my gf know i am dissing on her country’s website..)

why have I not been subscribed to the “wait wait, don’t tell me” podcast this entire time??