discovering the simplicity of shell archives..

realizing an RPM package was the wrong way to do it.

glad that the RPM package works, even if its not the “right way” to do it…

Getting my car’s oil changed for the first time ever. Its a momentous occasion.

home from dinner with sharp and wilcomm. thanks for the filet mignon, intel!

just got out of a meeting with sharp executives. embarrassed that i wore flip flops to work today :$

tired, feeling a bit sick even.

remembering why I should not go to the store with two girls.

this is pretty funny, since its happened on multiples occasions with different girls in the last year. just over the course of a conversation, the topic of beds has come up for some reason. the girl starts claiming how much she loves her bed, how comfortable it is, etc. and i say something like, “oh, really?” and then she responds something like “yeah, you should totally try it out.” now these have been good active LDS girls, so not really expecting them to say something like that, so i just give them this look, kind of an amused smirk (think jim halpert). they realize what they just said and quickly make an awkward change of subject. i giggle inside so as not to embarrass them.

so much for making a good blog post after a drought. 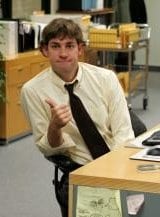 back from habitat for humanity. dug a nice 3 foot deep ditch.

happy that his code is being sent to customers for the first time ever.

ticked off at pennsylvania.

hoping pennsylvania doesn’t screw us all over.

wanted to go to the gym. failed.

back from berkeley, still a bit tired out

i have been playing with one of these at work for the last week or so:

its all in japanese, so i have to keep translating for my coworkers so we can debug issues.

yeah, so aside from it just being a busy morning, i had a busy weekend.

ok, maybe not on friday. i was more like tired and sleepy on friday, so i just kicked it old school at home. i watched the office, ate some dinner, and chillaxed. good times.

saturday was crrrrrrazy. one of the guys from church was moving, so i went to help out there for a bit starting at 10. after that, me and a group of friends went to a nice park for a picnic. we ate some good food, tie dyed (i did my socks), and played with the dogs people had brought. it was fun and the weather was really nice.

then i went home and the roommate and i went running. freakin hot outside. we ran a trail along side the mather field airport, and of course there are no trees, so it was killer. felt good afterwards though.

saturday night was silly. another single adult ward and ours teamed up for a dating game activity. i was assigned to be a contestant, meaning i had to question three bachelorettes and choose one to take out. very awkward. they forced all of us contestants to go sit in the kitchen so we could not see who we were choosing from and visa versa. this of course just made things more nerve wracking as i tried to think of funny questions to ask. in the end i called my mom and got some decent ideas. i made the audience laugh a few times. it was kind of silly though since all of the girls that i was choosing from were from my ward, so i basically knew who they were just by their voices. but whatever, the girl i chose is cool and we get free dinner at in-n-out burger, so not that bad in the end.

after the activity we hit up a birthday party in granite lake aka where the rich people live. some pretty nice houses out there. the party was so so, only knew a couple of people there, didn’t really feel like dancing to the techno music the dj (who was dressed like a clown) was playing.

got home, and i had a terrible stomach ache. dunno why. almost threw up.

sunday was long. i was at church from 10 until 5, with no lunch in between. i survived though. hung out with some friends in the evening, hit up the last bit of a fireside to check out the ladies, and then called it a night (or at least tried to with the previously mentioned terrible karaoke going on).

that was my weekend.

wondering what happened to meeting in the lobby at 11:45

i woke up at around 6:38 and decided ten more minutes in bed sounded nice. so, i stayed. but as i started to get up, i realized i was sticking to the bed! as far as i can remember, i think i fell asleep last night with a piece of gum in my mouth, and now it was gummed up between my shoulder and my bed. none in my hair thankfully. anyway, i wasn’t too bugged, especially since i had woken up without an alarm, which always means its going to be a not dead tired day.

so, i hopped in the shower. for some reason my conditioner bottle felt like exploding on me today. i tried using reverse suction to put some of the excess conditioner back into the bottle, but that ultimately failed. oh well.

as soon as i got out of the shower, i started brushing my teeth. i didn’t mean to. i was a bit annoyed since then i couldn’t have the rest of my mango or grapefruit for breakfast (it tastes too nasty). but i had an apple for my fruit instead.

it cooled off A LOT over the night. last night i had trouble falling asleep since it was so stuffy in my room (and i had to close the windows because of the obnoxiously bad karaoke coming from the apartment across the way), but this morning the apartment was almost chilly. which was a nice change after a warm weekend.

i turned on my itunes, and randomly the cover of “video killed the radio star” by the presidents of the united states of america came on. do you know how many times that song has been covered? i count at least 47 different bands who have covered it on the itunes store. i believe the original was by the buggles. anyone want to correct me?

i really need to send off a letter, but the only mailbox near my house is located in the worst location possible. there is no where within about two blocks to park my car near it. i am just going to have to run to it one of these days.

that was my morning.

amazed by the terrible karaoke music coming in through my window.

Sitting around after the fireside… Not seeing anyone to talk to..

alive after the dating game. upset tummy from too much pizza.

back from the picnic. relax time till the dating game.

kinda not looking forward to tonight’s ward activity since it most likely will be awkward.

finally getting to watch the office.

i work with the vista drivers and i have to use a thinkpad w/ xp at work. it is torture. yesterday i spent the morning trying to get rid of this stupid virus that was infecting the MBR of all my flash drives and test hard drives. i ended up having to use my macbook to clean them off correctly (apparently the windows built-in formatter doesn’t wipe the MBR and apparently it no longer comes with fdisk either.. go figure). soooo obnoxious.

this was posted today on slashdot:

it seems like a happy thought to me, but i doubt it will happen anytime soon. the most interesting reader comment though was here:

There never was a Windows OS!

“Windows NT was developed by Dave Cuttler (of DEC VMS team) based on a operating system specification developed by IBM. (It was supposed to be released under the name OS/2 version 3).

Microsoft implemented the Windowing API on top of that operating system.

The fact is that Microsoft has never developed a commercial operating system from scratch!!!

They have only incremented the original Windows NT (a.k.a. OS/2 v3.0) code base, for example by: - replacing the OS/2 file system delivered in Windows NT with the more modern NTFS - re-writing the OS/2 deveice driver layer of Windows NT with a new, 32-bit and C-based API [the original NT device driver model was 16-bit and assembler-based] - moving the implementation of the graphics API into the ring-0 kernel [big mistake!] - replacing the OS/2 multitaskin DOS compatibility (i.e. the text window of Windows) with a less DOS-compatible one, which was supposed to run on multiple processor architectures.

The effort to create a new operating system core for Vista failed because of lack of in-house knowlege.

The task of writing a new core OS (under the Windows API) seems to be too difficult for a company run by marketing people and lawyers.”

its all so clear now. have fun with vista, windows lovers.

still has not watched the office!

realizing just how terrible the windows registry is.

hates windows. can’t believe i have to deal with viruses anymore.

accepting donations for a trip to thailand.

out with the missionaries.

back from the gym.

happy to be done with Monday

chillin at the grandparent’s house

going out for burgers

going to priesthood session with my grandpa.

ready for the weekend.

i wanted some egg salad for dinner, so i boiled a pot of water to hard boil some eggs in. well, i guess i was supposed to put the eggs in before i boiled the water, cuz they just exploded when i put them in. it looked kinda cool… it looks like chipotle might be on the menu again…

frustrated. having one of those days.

unmotivated to get out of bed. just a having a tired day.

home from the kings game.

signed up for fall classes.